Posted May 2, 2022 by meezcarrie in historical, Natalie Jenner / 3 Comments 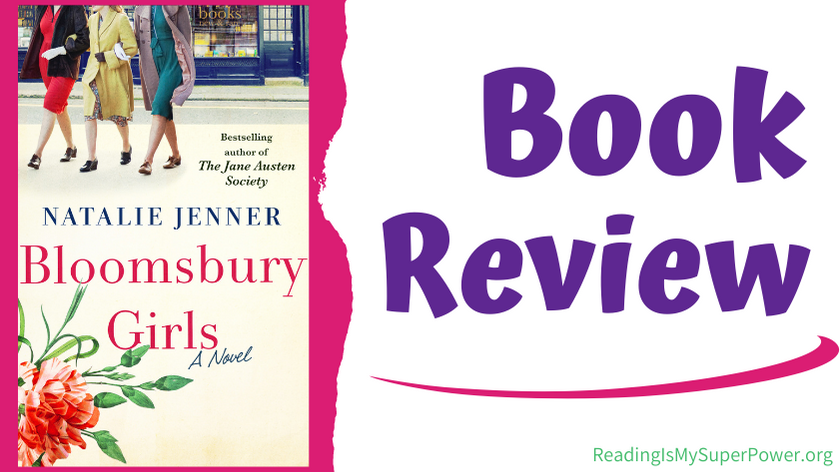 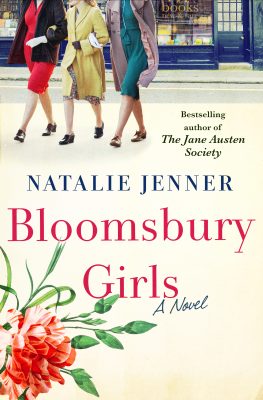 Natalie Jenner, the internationally bestselling author of The Jane Austen Society, returns with a compelling and heartwarming story of post-war London, a century-old bookstore, and three women determined to find their way in a fast-changing world in Bloomsbury Girls.

Bloomsbury Books is an old-fashioned new and rare bookstore that has persisted and resisted change for a hundred years, run by men and guided by the general manager’s unbreakable fifty-one rules. But in 1950, the world is changing, especially the world of books and publishing, and at Bloomsbury Books, the girls in the shop have plans:

Vivien Lowry: Single since her aristocratic fiancé was killed in action during World War II, the brilliant and stylish Vivien has a long list of grievances–most of them well justified and the biggest of which is Alec McDonough, the Head of Fiction.

Grace Perkins: Married with two sons, she’s been working to support the family following her husband’s breakdown in the aftermath of the war. Torn between duty to her family and dreams of her own.

Evie Stone: In the first class of female students from Cambridge permitted to earn a degree, Evie was denied an academic position in favor of her less accomplished male rival. Now she’s working at Bloomsbury Books while she plans to remake her own future.

As they interact with various literary figures of the time–Daphne Du Maurier, Ellen Doubleday, Sonia Blair (widow of George Orwell), Samuel Beckett, Peggy Guggenheim, and others–these three women with their complex web of relationships, goals and dreams are all working to plot out a future that is richer and more rewarding than anything society will allow.

Other Books In This Universe 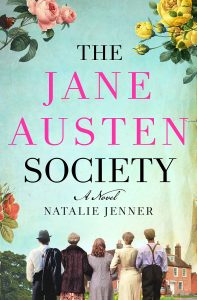 I don’t read a ton of general market fiction that isn’t a cozy mystery (because my Christian fiction TBR galaxy is…well… a GALAXY and I’ll never catch up lol) but I do have a handful of authors that I do love and pounce on their book as soon as they release. Kate Morton. Pam Jenoff. Hazel Gaynor. Sarah Addison Allen. I’ve heard a lot of people say that fans of Pam Jenoff will also enjoy Natalie Jenner’s books so I jumped at the chance to read & review her latest novel, Bloomsbury Girls! And yeah, the fact that it’s set in a 1950s London bookstore – with a whole floor devoted to rare books – didn’t hurt.

Stories like these, with women of great persistence despite the uphill climb they face, always inspire me to keep going when I come across daunting obstacles, too. Grace, Vivien, and Evie (whom some of you may remember from The Jane Austen Society) come from different backgrounds and different experiences but they have some key things in common. They’ve all had their hopes dashed painfully, they are all determinedly chasing a dream of ‘better’, and they are all fighting to be respected as females in a predominately male industry. It’s these shared commonalities that give this story its structure and its heart – and make it instantly relatable to any woman, of any era, even if our exact situations don’t mirror those of these three spunky characters.

The author’s writing voice is warm and elegant, while still being entertaining. She draws you in with the intriguing history of post World War 2 London – the glamour of society, the grit of the everyday, and the overlap where they meet. Grace, Vivien, and Evie are vibrant characters with inner strength and determination & readers will love cheering for their success.

Bottom Line: Bloomsbury Girls by Natalie Jenner is a story of the unnoticed, the marginalized, who fight against insurmountable odds to be seen, to be noticed, to change the narrative that society has written for them. It is a heartfelt love letter to under-appreciated female authors, a shot of hope for the currently marginalized, and ultimately an engaging read with vividly drawn & smartly layered characters. It is a reminder to never underestimate the power of female friendship, to never dismiss a minority as less than, and to see the worth in every person you encounter. Add in a dash or two of romance that made me swoon and a particularly intriguing rare book that made me smarter, and I’m an instant fan!


Reviewer’s Note: Reviewers may want to be aware that there is some use of God’s name as cursing and (not explicit) mentions of adult situations as well as a same sex relationship in the background of the story. 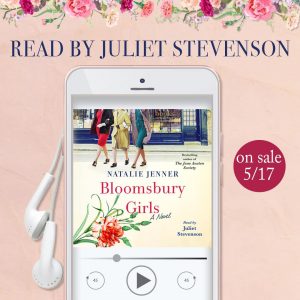 Listen to a sample HERE 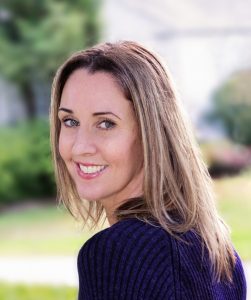 Natalie Jenner is the author of the instant international bestseller The Jane Austen Society and Bloomsbury Girls. A Goodreads Choice Award runner-up for historical fiction and finalist for best debut novel, The Jane Austen Society was a USA Today and #1 national bestseller and has been sold for translation in twenty countries. Born in England and raised in Canada, Natalie has been a corporate lawyer, career coach and, most recently, an independent bookstore owner in Oakville, Ontario, where she lives with her family and two rescue dogs. Visit her website to learn more.

Dear readers, I am immensely grateful for the outpouring of affection that so many of you have expressed for my debut novel The Jane Austen Society and its eight main characters. When I wrote its epilogue (in one go and without ever changing a word), I wanted to give each of Adam, Mimi, Dr. Gray, Adeline, Yardley, Frances, Evie and Andrew the happy Austenesque ending they each deserved. But I could not let go of servant girl Evie Stone, the youngest and only character inspired by real life (my mother, who left school at age fourteen, and my daughter, who does eighteenth-century research for a university professor and his team). Bloomsbury Girls continues Evie’s adventures into a 1950s London bookshop where there is a battle of the sexes raging between the male managers and the female staff, who decide to pull together their smarts, connections, and limited resources to take over the shop and make it their own. There are dozens of new characters in Bloomsbury Girls from several different countries, and audiobook narration was going to require a female voice of the highest training and caliber. When I learned that British stage and screen actress Juliet Stevenson, CBE, had agreed to narrate, I knew that my story could not be in better hands, and I so hope you enjoy reading or listening to it. 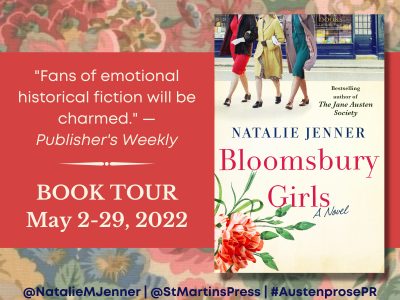 What about you? What makes you want to read Bloomsbury Girls by Natalie Jenner?