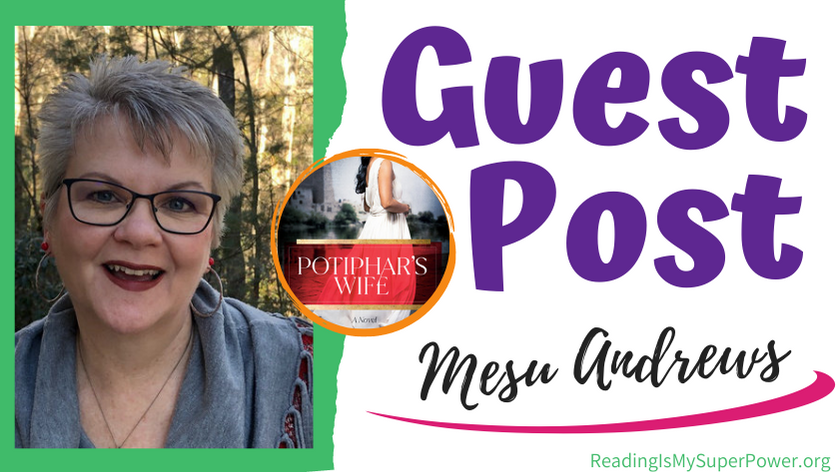 Please join me in welcoming one of my favorite people – the precious Mesu Andrews – to the blog today to talk about her new novel Potiphar’s Wife & the heart of a hero! 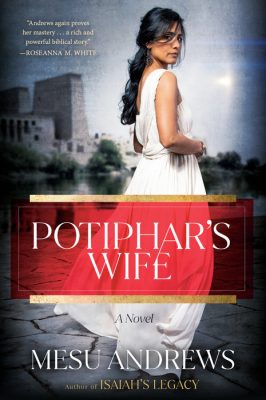 One of the Bible’s most notorious women longs for a love she cannot have in this captivating novel from the award-winning author of Isaiah’s Legacy.

“Mesu Andrews yet again proves her mastery of weaving a rich and powerful biblical story!”—Roseanna M. White, author of A Portrait of Loyalty

Before she is Potiphar’s wife, Zuleika is the daughter of a king and the wife of a prince. She rules the isle of Crete alongside her mother in the absence of their seafaring husbands. But when tragedy nearly destroys Crete, Zuleika must sacrifice her future to save the Minoan people she loves.

Zuleika’s father believes his robust trade with Egypt will ensure Pharaoh’s obligation to marry his daughter, including a bride price hefty enough to save Crete. But Pharaoh refuses and gives her instead to Potiphar, the captain of his bodyguards: a crusty bachelor twice her age, who would rather have a new horse than a Minoan wife.

Abandoned by her father, rejected by Pharaoh, and humiliated by Potiphar’s indifference, Zuleika yearns for the homeland she adores. In the political hotbed of Egypt’s foreign dynasty, her obsession to return to Crete spirals into deception. When she betrays Joseph—her Hebrew servant with the face and body of the gods—she discovers only one love is worth risking everything.

the heart of a hero


In 2008, a worldwide competition began between two mega-heroes in the block-buster film, Twilight.

Are you…team Edward or team Jacob?

I don’t typically watch movies about vampires and werewolves—SHEESH! But I was fascinated that a scrawny, sparkle-faced vampire and a shirtless, muscle-bound werewolf could capture hearts and imaginations all over the world. Logically, it makes no sense to love horrific fictional characters. But it happened. My question is: What was so irresistible in those heroes’ hearts?

I write novels about biblical characters, REAL men and women whose lives were important enough for God to record in His-story/history—the Bible. If I hope to make the real-life heroes of Scripture more utterly irresistible than any fictional champion or sappy Romeo, I must build their “hero hearts” with care.

Think about some of the Bible’s best-looking leading men: 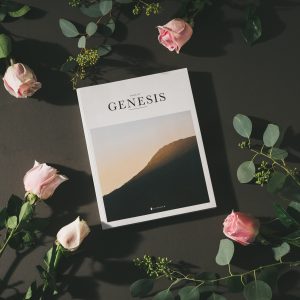 The Bible tells us there was more to all three of these biblical heartthrobs than just a pretty face (or body). David, Daniel, and Joseph each rose to high levels of power through God-given wisdom and courage after significant suffering.

Speaking of suffering—let’s talk about Joseph’s tormenters. His pride was first to betray him when he bragged about his dreams to his ten older brothers. They sold him into slavery, and Pharaoh’s captain of the guard made him chamberlain over his entire estate. That’s when Joseph’s real suffering began.

“After a while his master’s wife took notice of Joseph and said, ‘Come to bed with me!’” Genesis 39:7 NIV

The Tormenter Has a Name

The Bible tells us Joseph served Potiphar, but it doesn’t reveal his wife’s name. Both the Quran and Ginzberg’s, Legends of the Jews (Vol. 2), call her Zuleika and reveal more details about her scheming nature and Joseph’s torturous life in her presence. History affirms Joseph’s handsome appearance, but his flawless character also played a part in making him irresistible.

According to the historical tales, Zuleika invited noblewomen to her villa for tea and served the guests oranges with knives to peel them. Evidently, Joseph was in the room, and the women were so enamored by his good looks they unknowingly cut themselves while peeling their oranges! Chaos ensues. The women accuse Joseph of casting a spell over them and Zuleika of conspiring with him.

Of course, I had to include SOME of the crazy story in my upcoming release, Potiphar’s Wife, since it was recorded in both documents, but does any of that tall-tale make Joseph an irresistible hero? Probably not—because we see nothing of his heart.

The Heart of a Hero

Who was the first hero—in a movie or a book—that made your chest ache a little when you read about him? For me, it happened with a movie. I don’t remember the title, but I was in junior high. I’ve never forgotten that achy feeling or the thought: I hope someone loves me like that someday. 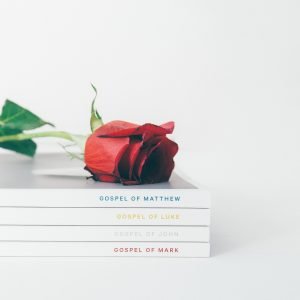 The hero wasn’t extremely good looking, but the girl he loved thought he was handsome. He protected her because he cherished her. He was willing to sacrifice anything—everything—to have her. He was fun. Sometimes vulnerable. Always honest. Strong-willed, but not unbending, and when he refused her, it was ultimately the very best thing for them both.

The Greatest Hero of All

I don’t know if you’ve read any of my books—or if you ever will—but I’d like you to re-read the paragraph above and think about Jesus as the Hero of your life’s story:

When we see Jesus with the heart of a Hero, we can trust Paul’s words:

“We know that in all things God works for the good of those who love him,
who have been called according to his purpose.”

Think of your greatest fictional hero and ask, Why do I admire him? Then consider all the very real ways Jesus fulfills those same desires. Today. Tomorrow. Forever. Then vote with me: Team Jesus! 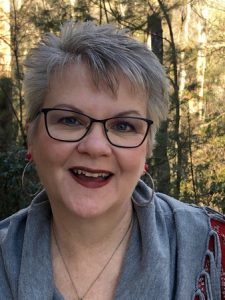 MESU ANDREWS is the Christy Award-winning author of Isaiah’s Daughter and numerous other novels, including The Pharaoh’s Daughter, Miriam, Of Fire and Lions and Love Amid the Ashes. Her deep understanding of and love for God’s Word brings the biblical world alive for readers. Mesu lives in North Carolina with her husband, Roy, and enjoys spending time with her growing tribe of grandchildren. 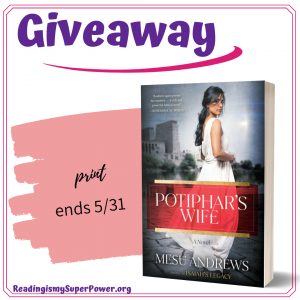 WaterBrook is offering a print copy of Potiphar’s Wife by Mesu Andrews to one of my readers! (US only. No P.O. Boxes. Void where prohibited by law or logistics.) This giveaway is subject to Reading Is My SuperPower’s giveaway policies which can be found here. Enter via the Rafflecopter form below.


What about you? What makes you want to read Potiphar’s Wife by Mesu Andrews?