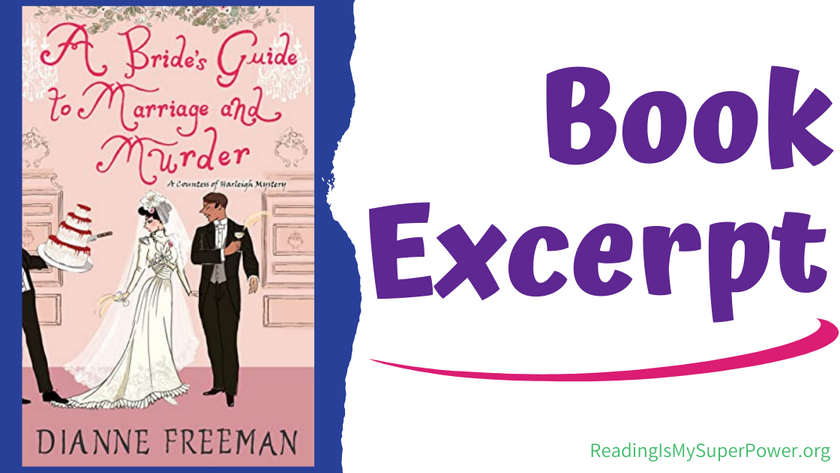 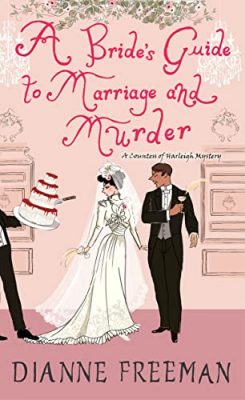 “Pure unadulterated fun” (Publishers Weekly) for fans of Ashley Weaver, Deanna Raybourn, and Tasha Alexander, the Agatha Award-winning Countess of Harleigh Mysteries are a witty romp through the high society of Victorian England with a touch of romance, an appealing and independent female lead, and rich historical detail. In this charming fifth installment, Frances Wynn, the American-born Countess of Harleigh, finds her wedding day overshadowed by murder . . .

On the eve of her marriage to George Hazelton, Frances has a great deal more on her mind than flowers and seating arrangements. The Connors and the Bainbridges, two families of American robber barons, have taken up residence in London, and their bitter rivalry is spilling over into the highest social circles. At the request of her brother, Alonzo, who is quite taken with Miss Madeline Connor, Frances has invited the Connor family to her wedding. Meanwhile, Frances’s mother has invited Mr. Bainbridge, and Frances fears the wedding may end up being newspaper-worthy for all the wrong reasons.

On the day itself, Frances is relieved to note that Madeline’s father is not among the guests assembled at the church. The reason for his absence, however, turns out to be most unfortunate: Mr. Connor is found murdered in his home. More shocking still, Alonzo is caught at the scene, holding the murder weapon.

Powerful and ruthless, Connor appears to have amassed a wealth of enemies alongside his fortune. Frances and George agree to put their wedding trip on hold to try and clear Alonzo’s name. But there are secrets to sift through, not just in the Bainbridge and Connor families, but also in their own. And with a killer determined to evade discovery at any cost—even if it means taking another life—Frances’s first days as a newlywed will be perilous indeed . . .

We thanked Mr. Wilson and encouraged him to stop at the kitchen and partake of the feast once he’d packed up his belongings. George stayed behind to make arrangements to see the photographs when we returned from our wedding trip, while I said a tearful goodbye to Rose and left her in the custody of her doting grandmama. Then I slipped upstairs to ring for Bridget and change for our travels. I’d hate to be late and miss our train.

Fortunately, Bridget had kept better track of time than I and was waiting for me when I stepped through the bedchamber door, my traveling dress at the ready.

She raised her hands when she saw me. “Here you are, my lady.” She turned me around and began working on the buttons on the back of my gown.

“Did you find time to eat?” I asked her.

“Yes, ma’am. We’re feasting below stairs. I don’t recall his lordship ever running to such extravagance with a luncheon menu before.”

“Funny, I don’t recall a thing I ate. I suppose weddings are like that. There’s so much planning beforehand and the actual event passes by in the blink of an eye. Are you and Blakely ready to leave for the train?”

Bridget had finished with the buttons on the back and was now working on the sleeves. “As soon as we get you changed, I’ll hand this gown off to the housekeeper and I’m as good as ready. I’ve asked her to send it on to your aunt’s house, ma’am, as I’m sure Jenny will know how to clean it.”

Since Jenny had been my maid before she worked for Aunt Hetty, I was quite familiar with her skills and certain Bridget was right. “Well done, Bridget. What about the bags?”

“The baggage is already loaded on the carriage. Everything is ready and waiting for us.” She peeled the sleeves off my arms and I stepped out of the wedding gown.

“I’ll need to say goodbye to the guests. After that, I’ll be ready to leave, too. It’s been years since I’ve had a trip.”

“Don’t I know it.” Bridget laid the gown out on the bed and picked up my traveling dress. “Are you planning to throw your bouquet, ma’am?”

“I hadn’t thought of that. If there’s anyone left to throw it to. The whole time we were with the photographer, guests were traipsing back and forth between here and the Connors’ residence. I can’t imagine why.” I turned to see myself in the mirror as she began fastening the dress.

“That color is perfect for a trip to the south of France.”

She was right. It was a blue-green that brought to mind the sea and warm, sunny climes. And it fit to perfection. It was worth every penny I’d scraped together.

The new kid gloves matched beautifully. I sat down to button up the left hand while Bridget fastened my shoes, then buttoned up the right for me. She handed me my bag and bouquet.

“This is it,” I said, nearly bursting with excitement. “I’ll meet you on the train.”

Bridget smiled up at me. “Yes, you will, Mrs. Hazelton.”

George awaited me at the foot of the stairs. I wanted to skip down them, take him by the arm, and be on our way. The doorbell sounded over the hum of voices in the drawing room. George looked at me, shrugged, and opened the door, admitting Inspector Delaney.

“This is a surprise,” I said. “How lovely you’ve decided to come and celebrate with us after all. What a shame we’re on our way out.”

Delaney glanced around, taking note that we were the only ones in the entry hall. “My felicitations to you both, but I’m here in my official capacity.”

I moved slowly down the stairs, fighting a sense of dread. It was never a good sign when the police showed up at one’s wedding.

“Is something wrong, Inspector?”

He cleared his throat. “Do you have a relative by the name of Alonzo Price, ma’am?”

“Yes.” Fear kept me frozen in place. “He’s my brother. Has something happened to him?”

“Arrested?” George echoed. “Whatever for?”

Delaney heaved a sigh. “For the murder of James Connor.”

My legs began to wobble and I reached for the bannister, dropping my bouquet. It bounced down the remaining steps, leaving sad remnants behind until it settled in a heap at George’s feet. 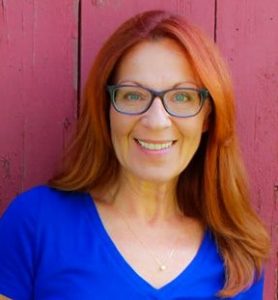 Dianne Freeman is the acclaimed author of the Countess of Harleigh Mystery series. She is an Agatha Award and Lefty Award winner, as well as a finalist for the prestigious Mary Higgins Clark Award from Mystery Writers of America. After thirty years of working in corporate accounting and finance, she now writes full-time. Born and raised in Michigan, she and her husband split their time between Michigan and Arizona. Visit her at www.DiFreeman.com. 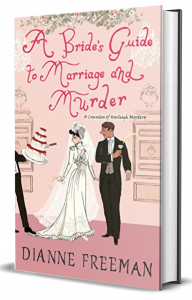 What about you? What makes you want to read A Bride’s Guide to Marriage and Murder by Dianne Freeman?

2 responses to “Book Spotlight (and a Giveaway!): A Bride’s Guide to Marriage and Murder by Dianne Freeman”