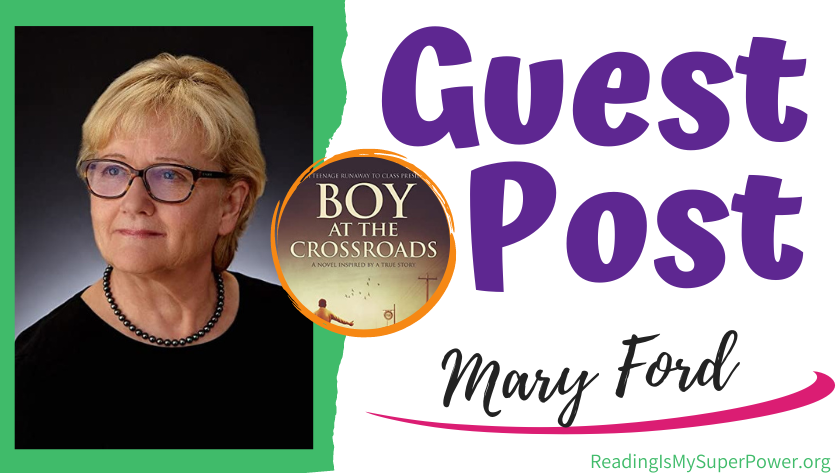 Please join me in welcoming Mary Ford to the blog today to talk about her debut novel Boy at the Crossroads, a fictionalization of her husband’s story. 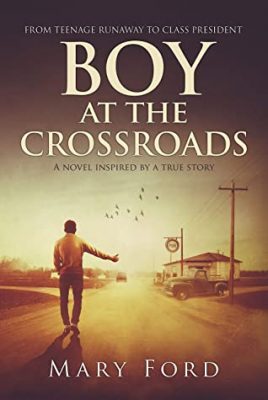 
He hitched a ride to a different life. Only time would tell if it would be better or worse…

Tennessee, 1955. Conley Ford learned quickly the world’s full of hard knocks. Seeking the wrong kind of excitement, the restless thirteen-year-old falls in with a group of older boys joyriding in stolen Mercury cars… until he is arrested and put on probation. With a harsh father waiting and too embarrassed to face his classmates as a jailbird, the impetuous youth leaves town, making it all the way to New Orleans.No stranger to demanding work from the age he was old enough to walk, Conley uses his wits and street smarts to commandeer a hot dog cart and make some cash. But when a turf war and a near-fatal accident sends him back home, the resourceful teen faces a choice between staying in misery or once more striking out into a dangerous world.Can this troubled young man ever find somewhere he can thrive?

Inspired by real events and told through cleverly crafted storytelling, Mary Ford depicts an adolescent who grew up impoverished and with minimal affection, but still found the strength to follow his gut toward something more. And as his journey takes him to Cincinnati, Chicago, and other far-flung parts of the United States, a lost little traveler ends up finding acceptance and hope in the one place he never expected.

Boy at the Crossroads: From Teenage Runaway to Class President is a warm-hearted coming-of-age adventure. If you like heroes overcoming adversity, vividly painted recollections, and stories of resilience, then you’ll love Mary Ford’s engaging tale.

by Mary Ford, author of Boy at the Crossroads


Running away at thirteen after being arrested for stealing cars could have set Conley Ford on a lifelong path on the wrong side of the law.

But those experiences didn’t ruin his life.

While the world is a vastly different place from East Tennessee in the mid-1950s, the core values of hard work, determination, and resilience endure. 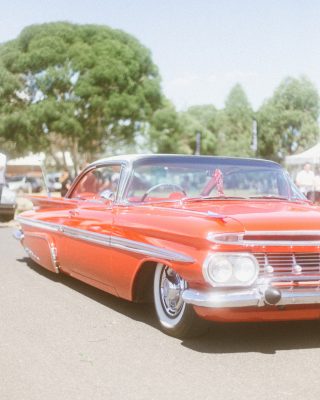 “Boy at the Crossroads: From Teenage Runaway to Class President,” is an adventurous, coming-of-age story about a teenager who made some bad decisions but was still able to lead a successful, productive life. Conley, a young teen who grew up impoverished and with minimal affection, still found the strength to follow his gut toward something more.

The book was inspired by my husband Conley’s true story about a brush with the law, hitchhiking through the south, the characters he meets along the way, and how he ends up in the place he least expects.

The book has been positively reviewed on Amazon, by BookLife, Kirkus Reviews, the Historical Fiction Company and more.

More than anything else, this is a tale of human resiliency that reminds us that each one of us is ultimately in charge of our own destiny.

For any youngster who has made some bad choices leading to a life of crime or destruction, Conley’s story could possibly be life-changing.

Former neighbors, whom Conley and I haven’t seen in forty years, recently discovered “Boy at the Crossroads” online. They were so inspired by the story, that they made a $200 donation to a local center for troubled teens in their hometown.

Conley, who was the fifteenth of sixteen children, says in the book’s prologue:

“Three questions rattled around in my head for years: How was I able to run off at thirteen and live on my own? How did I become self-reliant at such a young age? Why was I more at home, away from home?”

The easy-to-read novel endeavors to answer those questions. While the story can inspire young adults, it also takes any reader back to a simpler time that included skipping school, drag racing, siphoning gasoline, jalopies, and catching lightning bugs.

“Boy at the Crossroads: From Teenage Runway to Class President” is a classic coming-of-age story set in the 1950s. For more about Mary Ford and her novel, visit: maryfordedit.com. She and her husband, Conley, live in a small town south of Boston, with their dog, George. “Boy at the Crossroads” is available online wherever books are sold. 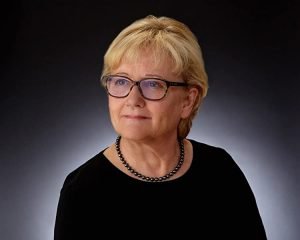 Mary Ford is an award-winning journalist who spent twenty-eight years as the editor of two successful, small-town newspapers in Massachusetts. She met Conley in 1971 and has always been fascinated by his story. They live in Scituate, Mass. with their dog, George. This is Mary’s first novel. You can visit her website: maryfordedit.com. 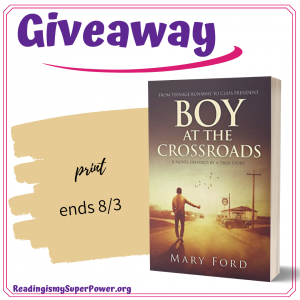 Books Forward is offering a print copy of Boy at the Crossroads to one of my readers! (US only. Void where prohibited by law or logistics.) This giveaway is subject to Reading Is My SuperPower’s giveaway policies which can be found here. Enter via the Rafflecopter form below.


What about you? What makes you want to read Boy at the Crossroads by Mary Ford?

8 responses to “Guest Post (and a Giveaway!): Mary Ford & Boy at the Crossroads”