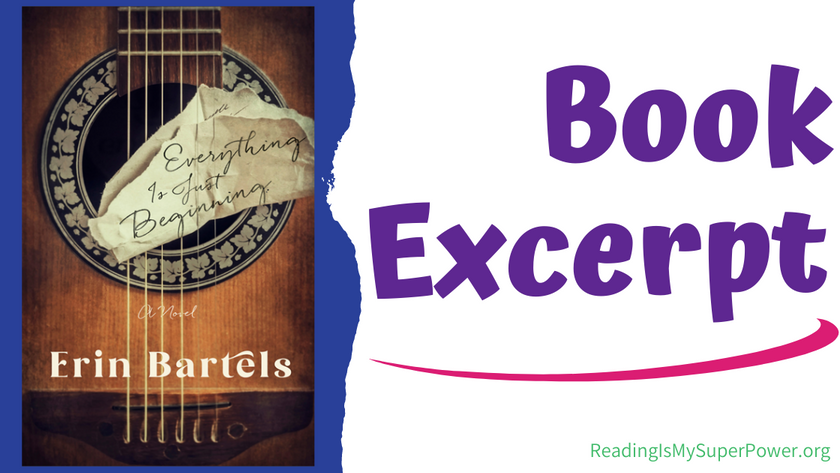 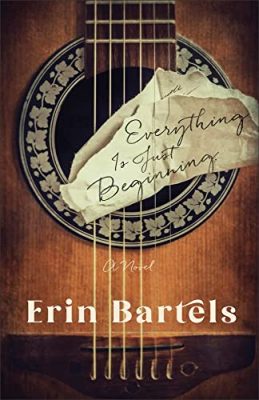 An Immersive Story of Music, Struggle, and Starting Over from an Award-Winning Author

Michael Sullivan is a talented lyricist and a decent guitarist, but since he was kicked out of his band (and his apartment), he’s not sure he’ll ever get a record deal. Living with his loser uncle in a beat-up trailer and working a dead-end job, Michael has little reason to hope for a better future. Until the invitation for a swanky New Year’s Eve party shows up in the mailbox. It’s for his uncle, with whom he shares his name, but his uncle is going out of town . . .

On the effervescent night of December 31, 1989–as the Berlin Wall is coming down, the Soviet Union is inching toward democracy, and anything seems possible–Michael will cross paths with the accomplished and enigmatic young heir to a fading musical dynasty, forever altering both of their futures.

Award-winning novelist Erin Bartels enchants with this story of two lonely souls who have exactly what the other one needs–if they could simply turn their focus from what is ending to what is just beginning.

I never wanted to live at my Uncle Mike’s. Partly because I swore I’d never have anything to do with my dad since he clearly wanted nothing to do with me. Being my dad’s twin brother, Uncle Mike is about as close to my actual dad as anyone could be. And partly because he’s the type of guy whose entire life screams failure, and the more your path crosses with his, the more likely you are to become a failure yourself. Truthfully, I do a good enough job of that on my own.

But then, if Uncle Mike hadn’t taken me in when Rodney and Slow kicked me out, I wouldn’t be covered in mud and standing in this pit with Natalie Wheeler.

Mike’s house was never meant to be a house. It was just the break trailer for the construction crew that built the Wheeler estate twenty years ago back in 1970. Mike was on the crew, and the Wheelers rented him the property cheap after their sprawling contemporary glass and stone house was finished. I guess because one of them liked him and one of them pitied him.

I’m not one hundred percent sure which impulse first inspired Natalie Wheeler to give me the time of day, but right at this moment, I don’t really care. Right at this moment, I’m seeing more clearly than I ever have in my short and rather disappointing life that maybe I’m meant for something . . . better. It doesn’t really matter to me how we got here.

That said, it probably matters to you—or if it doesn’t yet, it will shortly—so maybe I should start earlier. Maybe the night I first made it through the door of the Wheeler house. The night I first saw Natalie. Even if she didn’t see me.

The invitation I pulled out of the rusty mailbox did say Michael Sullivan, but it wasn’t for me and I knew it. It was for my uncle, who I happen to be named after. Not because my dad wanted to honor his brother, but because my mom preferred his brother to him and wanted to get back at him for missing my birth twenty-two years ago. Only I go by Michael, not Mike. The invitation said Michael. Probably because Mrs. Wheeler has class.

It arrived on Wednesday, December 27, 1989. I knew Mike wasn’t going to be around for New Year’s. I hadn’t been living with him long, but it was long enough to notice a few patterns.

One: he smoked a pack of Camels every day.

Two: he never slept at home on weekends.

Three: he was bad with money.

Five: he was wildly superstitious.

When it came to ringing in the new year in style at the Wheeler house, four out of five of those facts worked in my favor.

As I came back inside with the mail and knocked the snow off my boots, I heard Mike on the phone talking to his friend Carl. I knew it was Carl because of the voice Mike was using. He used one voice for work, another voice for girls, another voice for friends, and another voice for Carl, who was a friend but also someone who routinely loaned Mike money and rarely got any of it back.

I slipped the thick envelope (which had been sent through the post office even though I could see the iron gate at the end of the long Wheeler drive from the kitchen window—like I said, classy) into my pocket and listened as Mike convinced Carl to pay for gas for a road trip out to California, where Lynyrd Skynyrd was playing the Cow Palace on Sunday the 31st. Then they’d swing by Vegas on the way back to Michigan, where Mike was certain he’d win enough money to cover what he owed Carl as long as Skynyrd opened with “You Got That Right” and closed with “Sweet Home Alabama” (see also: superstitious). When he hung up the phone and started throwing some underwear and jeans into a duffle bag, I knew what I was going to be doing on New Year’s Eve.

Mike left the next morning without so much as a “Stay out of my room”—which the lock rendered unnecessary anyway. You might think he could have invited me to go along with him. I liked Lynyrd Skynyrd okay. The guys and I occasionally threw in a cover of “Simple Man” when we played gigs, which wasn’t as often as Rodney had wanted but proved to be more often than I managed to show up (see also: being kicked out). A good uncle might have made an effort to bring his aspiring rock star nephew out to California to live it up a little at a big concert. And I was over twenty-one, so I wouldn’t have been a drag on them in Vegas. But I knew he wouldn’t ask me to come. I was bad luck.

The day I was born and my mom named me after him, Mike lost half of his squad in a firefight somewhere west of Quảng Ngãi. For the next couple decades, whenever something went wrong in Mike’s life, which seemed like it was more often than in most other people’s, there was some way in which I was to blame. He routinely cheated on his girlfriends, but they dumped him because it was my eighth birthday or I had talked to him earlier in the day or I was watching the same TV show at the same time. When he got injured on a construction job, it was because my baseball team got mercied, not because he had been up drinking the night before. The day I got my first guitar—a right-hander even though I’m left-handed—he was sentenced to one hundred hours of community service after his third drunk and disorderly offense. The night I first kissed a girl, he was stranded in Detroit with a dead car battery.

The only reason he let me come live at his place when I found myself homeless back in August was because I promised to pay him rent and he needed the money. He always needed money. Most of the time he tried to stay out of the house—which was just fine with me—and when we were there at the same time, he was always looking at me sidelong, like I was contagious or something.

So when he left without me on Thursday morning, I was nothing but relieved. I had three boring days of work at Rogers Hardware in downtown West Arbor Hills to get through, days when I’d be marking down Christmas lights and stocking gardening supplies that people would look at for the next three freezing, snowy, slushy months but no one would actually buy until after Easter. Then it would be New Year’s Eve and I would finally see what was on the other side of that iron gate across the street.

Erin Bartels, Everything Is Just Beginning
Revell, a division of Baker Publishing Group, © 2023. Used by permission. 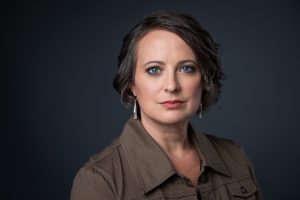 Erin Bartels is the award-winning author of We Hope for Better Things, The Words between Us, All That We Carried, and The Girl Who Could Breathe Under Water. A two-time Christy finalist and winner of two 2020 WFWA Star Awards and the 2020 Michigan Notable Book Award, Erin has been a publishing professional for twenty years. She lives in Lansing, Michigan, with her husband, Zachary, and their son. Find her online at www.erinbartels.com. 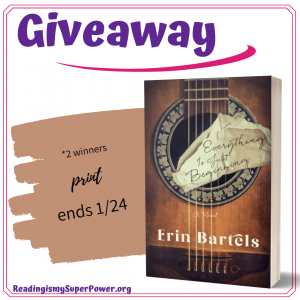 Revell is offering a print copy of Everything Is Just Beginning by Erin Bartels to TWO of my readers! (US only. Void where prohibited by law or logistics.) This giveaway is subject to Reading Is My SuperPower’s giveaway policies which can be found here. Enter via the Rafflecopter form below.


What about you? What makes you want to read Everything Is Just Beginning by Erin Bartels?

15 responses to “Book Spotlight (and a Giveaway!): Everything Is Just Beginning by Erin Bartels”